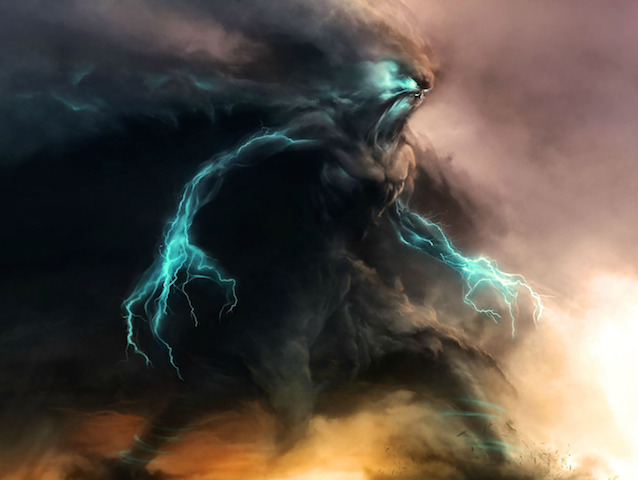 Storm Deva – The Nature Spirit of a Giant Storm

I had gotten into my sacred bath, I bath ritually and journey in the bath for myself or for clients a couple times a week for 2 hours or so.

The bath is my private uninterrupted space, I set it up the same way each time with many accouterments such as waterproof speakers, essential oils, my home made bath salts , candles, incense, flower head and herbs, flute, didgeridoo & mouth harp (the drum does not like the steamy hot atmosphere), crystals and other power objects I may be working with, I smudge the bathroom known to the family as my Bath-Womb and smudge myself .

So I was just beginning to go into an altered state via music, throat chanting etc.

Soon I felt an unusual presents, not a familiar one.

It was big, very very big and powerful but felt gentle & strong.

Through and behind my chanting I began to feel or maybe hear what I thought was a train in the distance or blasting or something?

I could feel the vibrations, then over the 30 minutes or so, it got louder and deeper and more intense.

Something was up the birds had stopped singing and the colour of the light had changed.

I realised the deep rumblings were thunder, an amazing orchestral beating of thousands of kettle drums and grandmother drums being struck rhythmically by Thor’s lightening hammer .

Then my phone (used in the bath to play trance music & drumming tracks) pinged and it said “storm and flood warning “ in your area.

So I opened the weather radar to see, wow a huge storm front and I mean huge was coming in across the whole Eastern seaboard of Australia from Queensland to Victoria and the entire coast of New South Wales.

I recalled my mystic mate Kevin Parker, had asking me if I had ever worked shamanically with the weather Deva spirits? At the time I said no it had not arisen for me.

The radar showed this monumental storm front was shortly going to pound us. No way in the world could it miss us, it was going to be quite a storm.

I realised it was close to twilight, twilight is a time when my and the doors of perception are most open and when the veils between the worlds is thinnest, a perfect time to connect .

I had already connected with the energy of this storm well before it arrived or even rationally knew it was coming, so it seemed very much to be an invitation to connect & go further and deeper, so I did.

I settled in to connect with the energies deeper, it felt amazing to feel into the sheer power of something this big, this Giant Nature Spirit Deva of the storm.

It was careering down on me and the booming rhythmic thundered was getting closer, thunder literally shaking the very earth like a huge shamans drum.

A thought arose in me, a doubt. Who am I to talk to this Huge Devic Spirit, maybe the energy is too big, maybe I should back off ?

“NO” the storm Deva said, you have asked permission you are humble, feel me “NOW”.

My heart raced a little, then opened up still further, I was in tears of rapture at the tingles that were coursing through my body. The storm and I had become one, the barriers of my limiting skin and limiting consciousness gone, my ego thin, the ecstasy and bliss were beautiful

The Storm Deva then said ! tas it spoke to my consciousness

“LETS PLAY, ask me something !”

What does one ask a mega storm? In retrospect I can not believe what I asked of it!

“how about you go around me and miss my home completely” Knowing fore well this was impossible having seen the trajectory & size of the storm coming into three entire states.

The Strom went very quiet, , the thunder stopped the wind settled, the birds started to call out seemingly in delight and celebration.

I was looking out of my bathroom window as the windows are always open when I bath, but I could not see a lot of the sky as the trees water sodden, had closed in around the window. I kept feeling into the energy, amazing as it was.

I said “I’m trying too” , should I get out of the bath and go onto the terrace to watch the light show roll in ?

Strom Deva said “NO” watch ME from above,”

I thought to myself, of course I will shamanically travel up and fly into the sky and watch from there.

Storm Deva said “NO …. use your iphone “

I opened the radar again to see the Radar live video, showing the storms progress over the past half hour or so, it had been literally coming straight at me in a huge front, as I watched I could not believe my eyes, the radar showed the storm had begun to change direction, ever so slightly at first increasingly more over the next 15 minutes. Finally and impossibly the storm slid by my home by literally only a few hundred meters away or less, the front was so big it could not possibly do this, but it had somehow opened up a gap and over the next half an hour or more as waves of the front came through, each one went past and even around my home so that the storm was all around very close to me & yet not ever over me, the Storm Deva seemed to Giggle at my astonishment, I even said at one point “enough!” who am I to have you do this ?

I was strangely disappointed that I had missed the fury of storm , and said to the the Storm Deva I ‘m sorry if that was egotistical of me to ask such a big ask, just let it rip.

Storm Deva said “YOU DO NOTHING LITTLE ONE , THIS IS MY DOING!

Storm Deva said., “I KNEW WHAT YOU WOULD ASK WHEN I FELT YOU FEEL ME & SO HUMMBLY FROM A GREAT DISTANCE , I CAME TO SHOW YOU THAT YOU CAN COMMUNICATE WITH THE WEATHER DEVAS AND SO YOU CAN TELL OTHERS OF THIS”

Titans such as this it seems, talk very slowly with few words, but with great authority, entering your consciousness almost from the inside out. It is difficult to describe with mere words.

At this point I want to say that it had occurred to me before asking that we had, had a lot of rain in the weeks before this storm and the land and all the plant and animals, rivers etc did not need more water, although half an hour or so after getting out of the bath, it poured and has not stopped raining much since then.

The reason I share this story is not to make me look the Shaman, or in order to demonstrate that these things are possible, I have communicated with many a Nature Spirit, Elementals such as fire or water, animal spirits, plants, a place, a home, a waterfall, even a landscape and a whole city Deva, but I felt to small or too in my ego or too less than, to try to manipulate the weather, I may never try to manipulate the weather, but I will communicate with Weather Deva’s given the chance.

It occurs to me in hindsight that it was a block on my behalf to not to want to try as I felt the only reason one would do so, was for personal human gain.

I do not communicate with other spirits for personal gain, but I had this block that to do so with weather would be.

We as humans have to a large extent been programmed to ask what can nature, the universe do for me, rather then just communicating for the sake of communicating, communicating with and building relationship with other nature spirits has always been a joy.

Let me tell you, communicating with a storm is a joyous experience, try it one day for yourself ! I now look at the sky the clouds and the rain in a different way, they are no longer inert weather patterns, they are playful titans in the service of great spirit.

Kevin is often reminding me that the work with Nature Spirits must be fun ! As well as being serious.

Well Kevin it seems you have indeed been listening to those clouds and they to you. As this was the funniest experience in a while. Between you, great spirit and a Great Storm you have taught me a very BIG great lesson.

One can simply play without the need for wanting anything or any outcome out of it. Thank you I am most grateful !

This occurred over 12 months ago, only now do I feel confident and brave enough to share it in this Blog.

2018-06-07
Previous Post: Nurturing Your Own Spirit and Self with Nature Medicine
Next Post: Clutter Clearing vs Space Clearing